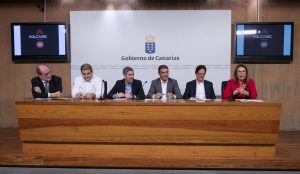 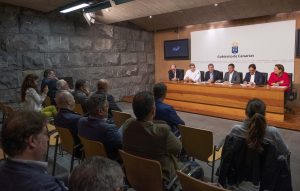 La Sexta and Televisión Canaria will broadcast on November 9 the series ‘The Traveling Chef’, a tour of the local products of each island by the hand of Michelin-starred chefs

The television series, produced by the Government of the Canary Islands, has 10 episodes and is framed within the ‘Grow Together’ project, which aims to generate synergies between the tourist and primary sectors in the Archipelago Fernando Clavijo highlights the value of the Canarian product as “great opportunity to expand the synergies between field and tourism because the resources of the primary sector are a huge letter of introduction for foreign promotion ” The President of the Government of the Canary Islands, Fernando Clavijo, has participated today, Wednesday, in the presentation of the documentary series The Traveling Chef, which produced by the Government of the Canary Islands will be broadcasted by La Sexta for all of Spain and by the Canary Islands Television. from November 9, as both television channels have agreed with the regional government. This series has been developed by the Ministry of Agriculture, Livestock, Fisheries and Water in collaboration with the regional department of Tourism and is part of the Canarian strategy Crecer Juntos, launched in 2015 to generate new synergies between tourism and tourism sectors. primary in the Islands, valuing the local product and opening new distribution channels for these products.

The series has been coordinated with respect to content by the chef Erlantz Gorostiza (MB Abama, who has two Michelin stars) and has brought together several chefs of international renown and popular to the public with the aim of becoming opinion makers regarding the local products of the Islands.

This audiovisual space has been set up by the Canary Islands Institute for Agrifood Quality and the public company Gestión Medio Rural de Canarias in the form of gastronomic travel through the Islands with the purpose of showing that there is a way of doing tourism in the Canary Islands beyond of the sun and beach, with Canarian gastronomy and products as protagonists.

In his presentation, this morning at the headquarters of the Presidency of the Government in Santa Cruz de Tenerife, the chief executive stressed the importance of putting regional production value because, said Fernando Clavijo, “our products are a great opportunity not only for respond to the needs of our collective supply, but also are attractive products for the millions of people who visit the archipelago every year, whether for tourism or work. ” In this sense, the President of the Government stressed that the program of initiatives Grow Together “makes our Canarian products a tourist attraction of first quality because it is a resource that comes from the primary sector as an extraordinary letter of presentation for foreign promotion.”

The Minister of Agriculture, Livestock, Fisheries and Water, Narvay Quintero, thanked all those who participated in the development of this series, the staff of ICCA and GMR, especially Erlantz Gorostiza, coordinating chef, and the representatives of the Televisión Canaria and Atresmedia, José Carlos Naranjo and María del Pino Quintana, for betting their channels on this audiovisual product. “The primary sector generates economy, wealth, connects us with our past and our traditions,” he added, “but also talks about the future, modern techniques and cutting-edge technology, and the primary sector also generates landscape and territory. It makes us different and that turns this series into a tour of the Islands, through scenarios that are familiar and that have made us what we are.

” In the same way, the Deputy Minister of Tourism, Cristóbal de la Rosa, stressed that the Canarian Government “has the objective of promoting the culinary offer and the local product as an outstanding attribute integrated into the tourist offer, as this adds value to the experience of the visitors and extend the benefits of the industry to the rest of society “. In this sense, Cristóbal de la Rosa pointed out that “the local products and the improvement that our farmers, stockbreeders and fishermen are carrying out and the traditional cuisine together with the work of the hotel professionals are the spearhead of this strategy”. For his part, Erlantz Gorostiza said that the goal was “to value the product that is currently part of the kitchen of many of those who participated, has been a trip through the cuisine of the Islands during which I learned and known products that I did not know myself.

” The series The Traveling Chef includes ten chapters (one for each island, except two in Tenerife, Gran Canaria and La Palma) in which several tours are carried out by farms, markets and local product stores. In the programs, which will be broadcasted by La Sexta and Televisión Canaria, the most emblematic landscapes of the Canary Islands will be highlighted through a sample of varied tourist offer and always culminating with a meal that is prepared with the base of the products presented during the minutes previous They always accompany the leading chef, in each case, both Erlanz Gorostiza as well as personalities from the island and local chefs.

The manager of Atresmedia in the Canary Islands, María del Pino Quintana, highlighted the “quality” of the product and has defended La Sexta as the “ideal channel to broadcast it, because it is a channel linked to quality products, a channel that has gastronomy in one of its main axes “.

While José Carlos Naranjo, responsible for RTVC, explained that this series is a product to “achieve one of the objectives of public television in the Canary Islands as it is to promote social cohesion of all Canaries, generating awareness and knowledge in all Islands with respect to each product “.